With “a variety of landscapes” as its motto, this country offers countless marvels: encountering The Big Five on its vast plains, wild territories in Limpopo, the extensive Wild Coast and its picturesque multicultural life.

Why South Africa for a Horseback Safari?

In the confines of the African continent, at one of the southern ends of the world, where everything seems to turn into enigmatic and mysterious, we find South Africa. It limits with several countries that surround it from west to east (Botswana, Mozambique, Swaziland and Zimbabwe) and, where the territory ends, with the mix of the Atlantic and Indian Oceans, that lap the shores of its most important cities. Besides, this land houses the independent nation of Lesotho within its territory.

Due to its length and its extension throughout the southernmost area of Africa, this country has different climates according to its regions, which makes it a truly diverse country in terms of flora and fauna. In addition, it is one of the countries with the largest number of safari reserves in the world, among which we find the famous Kruger National Park.

It comes as no surprise that South Africa is called the Rainbow Nation: its colourful and heterogeneous landscapes are complemented by its hybrid cultures and cosmopolitan cities, which add a magic tint to all its corners. Following we will describe the wonders that can be found in our horseback ride across South Africa. 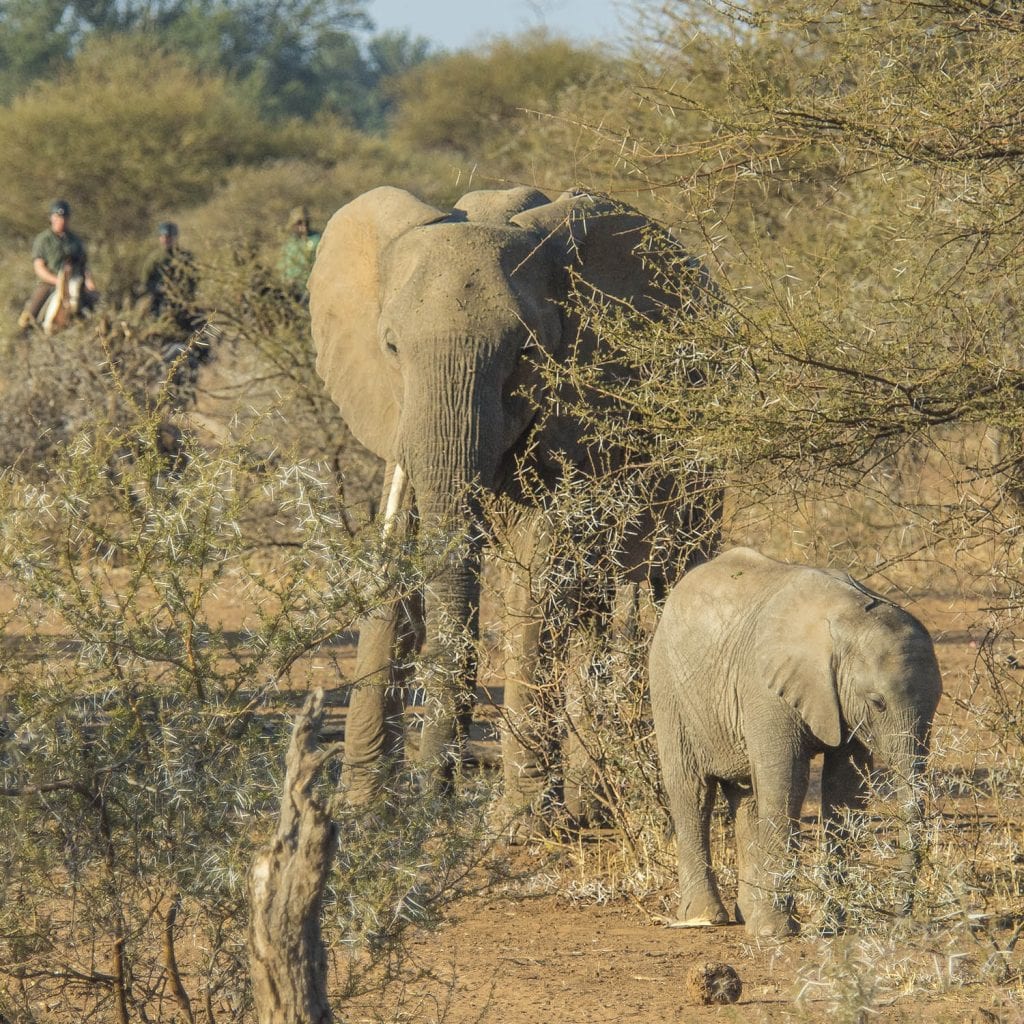 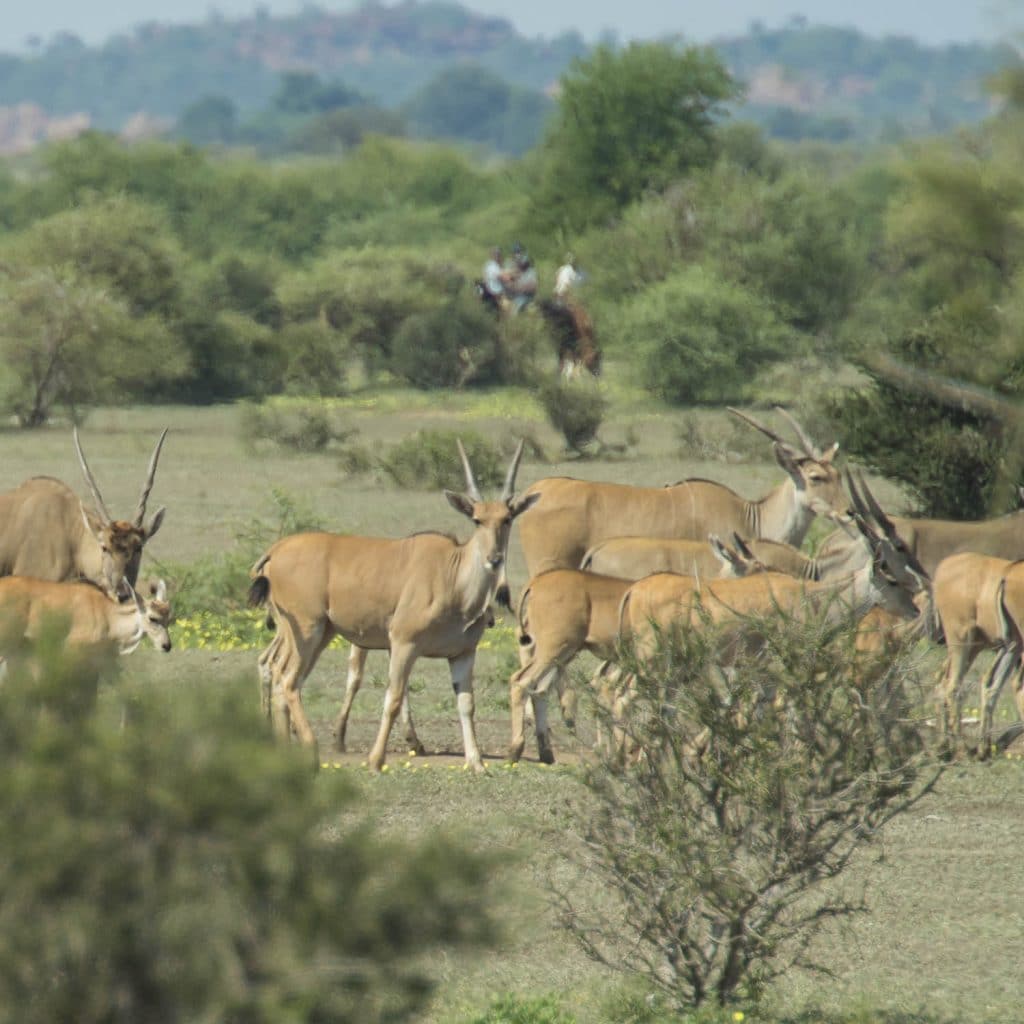 Let’s talk about diversity in flora and fauna, about mystery and enigma. Where do we find this perfect combination to go on a horseback safari in Africa? The answer is the Kruger National Park. Located at the northeast of the country, on the border with Mozambique, this park of approximately 19,000 square kilometres is the ideal place to spot the coveted “Big Five” (The Big Five: a South African journey where galloping and sighting makes a perfect combination). In this tour, we have the chance to stay in the Makalali Game Reserve, a private game reserve in which we can go searching for native species in a more exclusive way, and coexist with wildlife every step of the way. These lands, characterized for being mostly large and vast plains under the open sky, provide a clear panorama for animal sighting.

On the other hand, we find the province of Limpopo, name given in honour of the river that runs through it. It occupies the northernmost area of the country and it is distinguished by its unspoilt and wild landscapes. On its southern slopes, it houses mountain ranges, in which vast areas are available for the cultivation of macadamia nuts and avocados due to its subtropical climate. Then, towards the top, we will find typical mountain landscapes such as gorges, waterfalls, and hills. In this province, we will be able to delve into the Matlapeng Reserve, a paradise dotted with green mountains, undulating meadows and the thousand-year-old baobabs that we will see on our horseback safari African Explorer: Five good reasons for riding our horses out of the established path. We will also border its fantastic Red Lake, where hippos bathe at sunset.

As far as the Cape Peninsula is concerned, in its southernmost location, we find the “Table Mountain”, declared as one of the new seven wonders of nature in the world. These mountain formations represent an attractive monument due to its singular geologic condition. They are formed by grey sandstones that are resistant to erosion -which gives rise to the formation of steep and vertical slopes, therefore, its comparison with the surface of a table. This proves that nature knows about architecture too.

Last, but not least, we find the idyllic Wild Coast. This unspoilt paradise is waiting for us with an exotic experience, filled with pleasure and amusement. This is located in the Eastern Cape province, washed by the waters of the Indian Ocean. It is characterized by its incredible rivers, valleys, cascades and rocks, but mostly by its beaches. The South African coast is the ideal place to go on a horseback ride next to the sea, on that sand that reflects and multiplies rays of sun, where you can feel the wind on your face, where you ride among the steep stones. This is where our experience Wild Coast: A week of cavalcades over rocks and sands takes place. It is one of those places where a sunset becomes an unforgettable panoramic view. 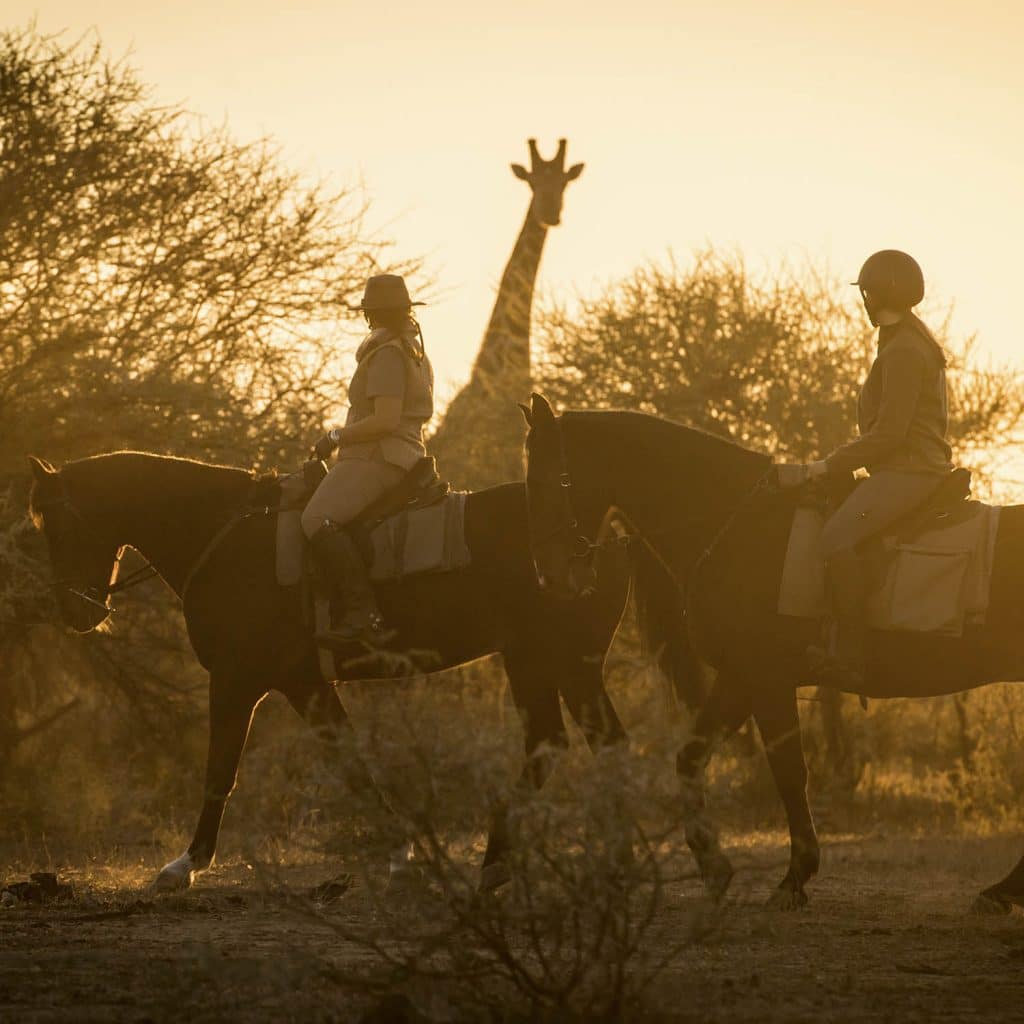 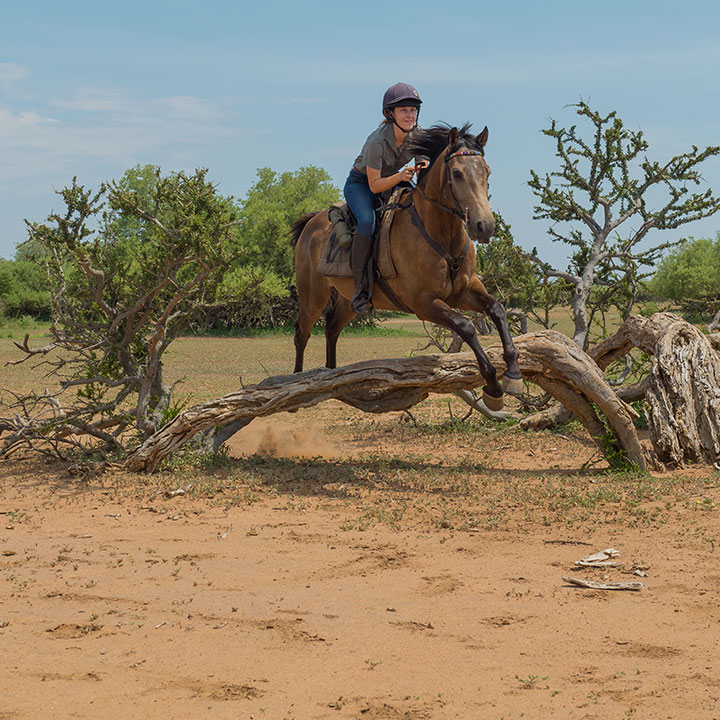 Climatic diversity also means vegetation diversity. This country concentrates a fifth of the vegetation of the entire continent, hence, being considered an area especially rich in biodiversity.

The northernmost areas consist of slightly undulating territories, most of which form a wide savannah, scattered by bushes and herbaceous plants of medium-tall size. However, the centre of the country presents poor vegetation due to the lack of rain, including typical desert bushes. To the south, we find the Cape region, considered as one of the seven Floral Kingdoms on the planet. It has almost 9,000 species of plants, 70% of which are endemic, meaning they only grow there. Although the country has a great variety and quantity of floral plants, its meadows are almost devoid of trees. However, near the northern end of the Kruger National Park, there are a significant number of those majestic and exotic trees, the baobabs.

If we talk about fauna, the Kruger National Park is the best place for animal sighting. The greatest natural reserve of the country houses a pure and unaltered habitat for a great variety of species. It is home to 13,000 elephants, 5,000 giraffes, 3,000 hippos, and more than 1,600 lions, which is why coming across some of these mammals throughout its vast territories is assured. We can also find other revered animals, such as the leopard, the blue wildebeest, the impala, the kudu, the hyena, the zebra, the baboon, the antelope, among others.

As regards birds, the species that abound in the country are the ostrich, the francolin, the owl, the quail and the guinea-fowl. In turn, along its shores, we will be able to sight dolphins, whales, and penguins, as well as countless fishes of varied colours and textures that decorate the depths of the sea. 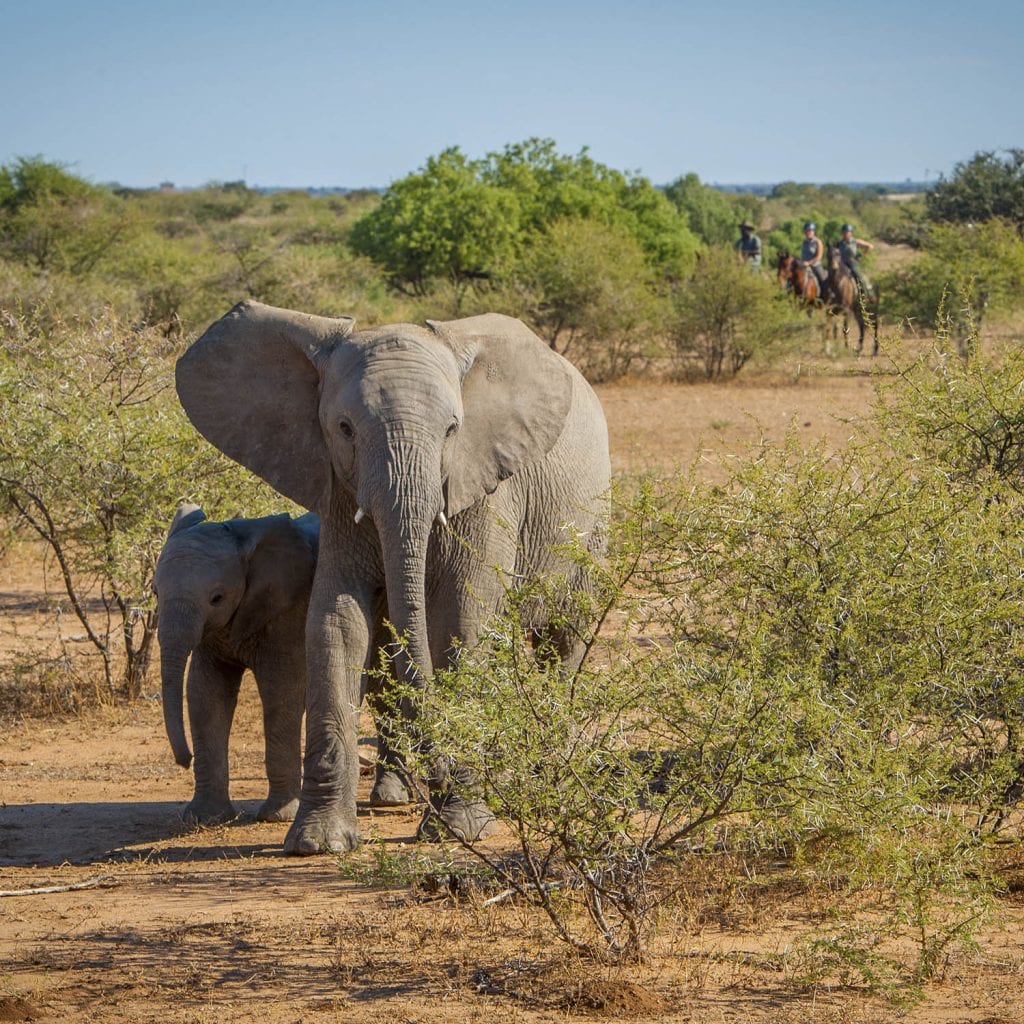 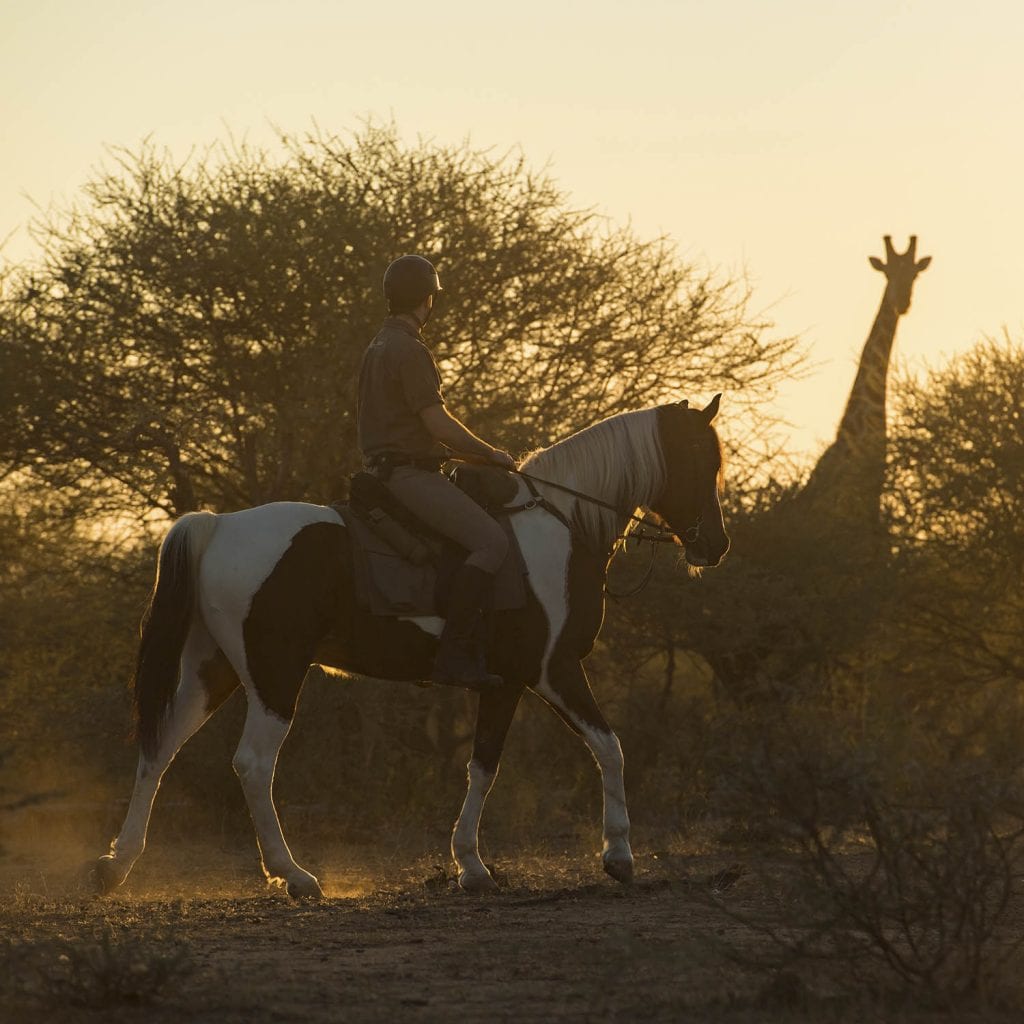 The urban concentration in South Africa is higher than in the rest of the countries. Still, urban areas are a small part of its territories, given that the rest of its landscapes tend to be deserted or destined to hold isolated touristic experiences that enable a full contact with nature. As far as its culture is concerned, Cape Town is the most heterogeneous and charming region. It contains the fourth largest population in the country and hosts a cosmopolitan environment. Its culture represents a combination between the local and the foreign, with Dutch, British and Malayan influences mostly.

Additionally, along the Wild Coast, we will be surrounded by a neutral and pleasant environment, resulting from the combination of landscapes and the picturesque Xhosa people that inhabit this great nature. Its traditional architecture consists of colourful thatched huts located over the uneven hills that dominate the coast. Seen from afar, these cultural brushes along the natural landscapes we see during the horseback rides provide a truly African touch to the experience.

Then, on the safaris we offer throughout the north of the country, we will be able to sight historic farms and housing developments in the city of Lesotho. Here, you will be able to have tea with the inhabitants and delve into the most exclusive African traditions in our horseback safari African Explorer: Five good reasons for riding our horses out of the established path. The ethnic combination of these pure local people provides a unique cultural wealth that will be evidenced not only in their lifestyle but also in their art and craftwork. 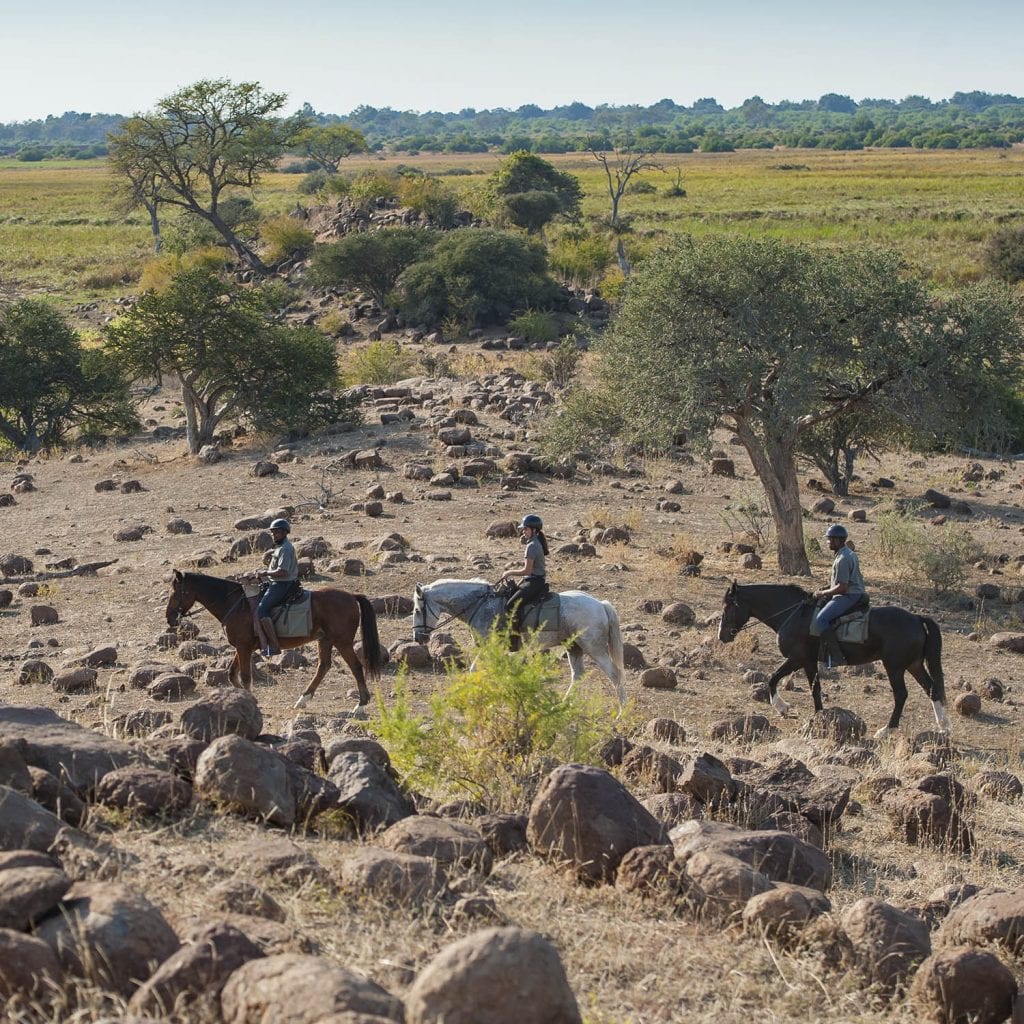 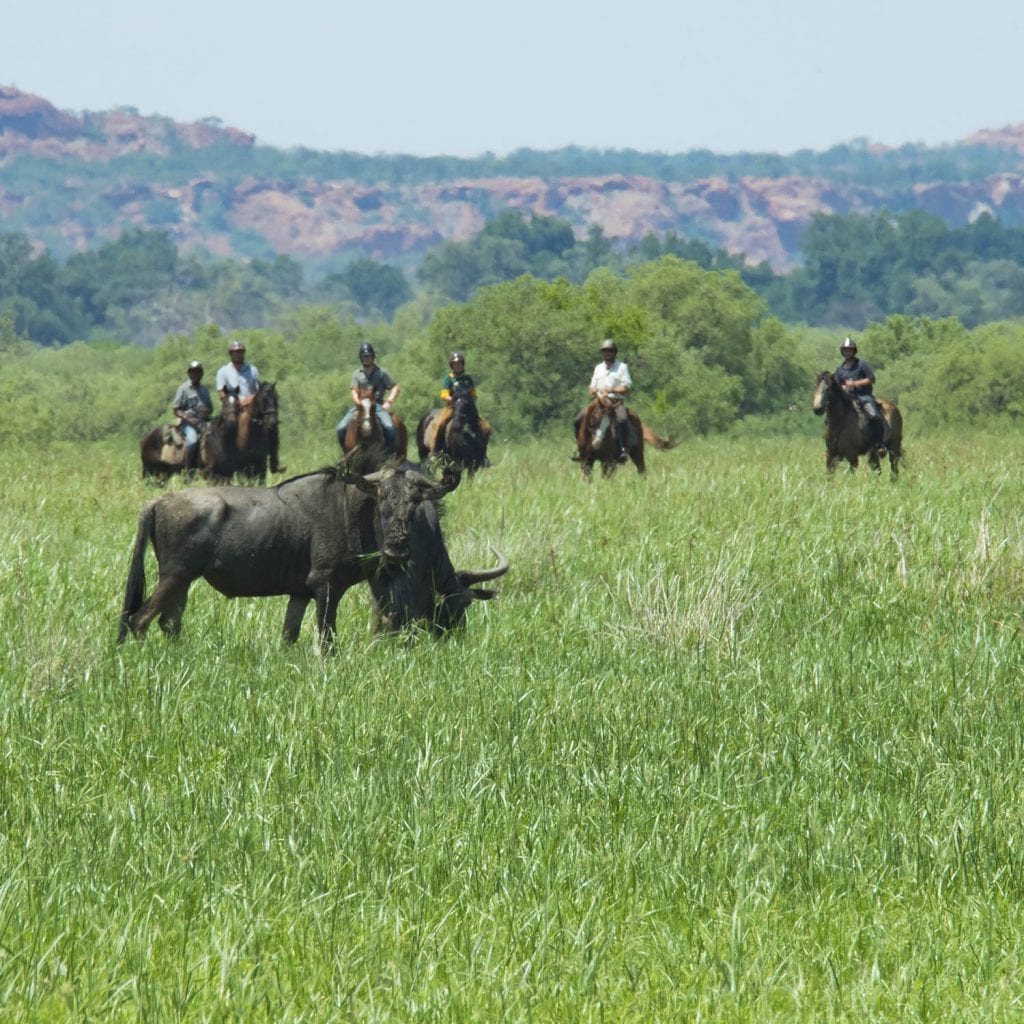 Going on a safari across Africa for the first time is, without a doubt, and adventure worth experiencing. Although you may not cover large territories as in Kenya and Tanzania, this country provides a more intimate experience, making it possible to be closer to the animals we encounter on our way. And, if you prefer a more relaxed odyssey, its exotic beaches are an ideal destiny.

There is an African proverb that goes as follows: “To grow is to see things”. The southernmost state of the continent offers a journey full of wild animals, marvellous skies, multicultural people, and endless colours that will make us connect with the purest African spirit. If growing is done through experiences as the proverb implies, this country is definitely worth seeing to grow. 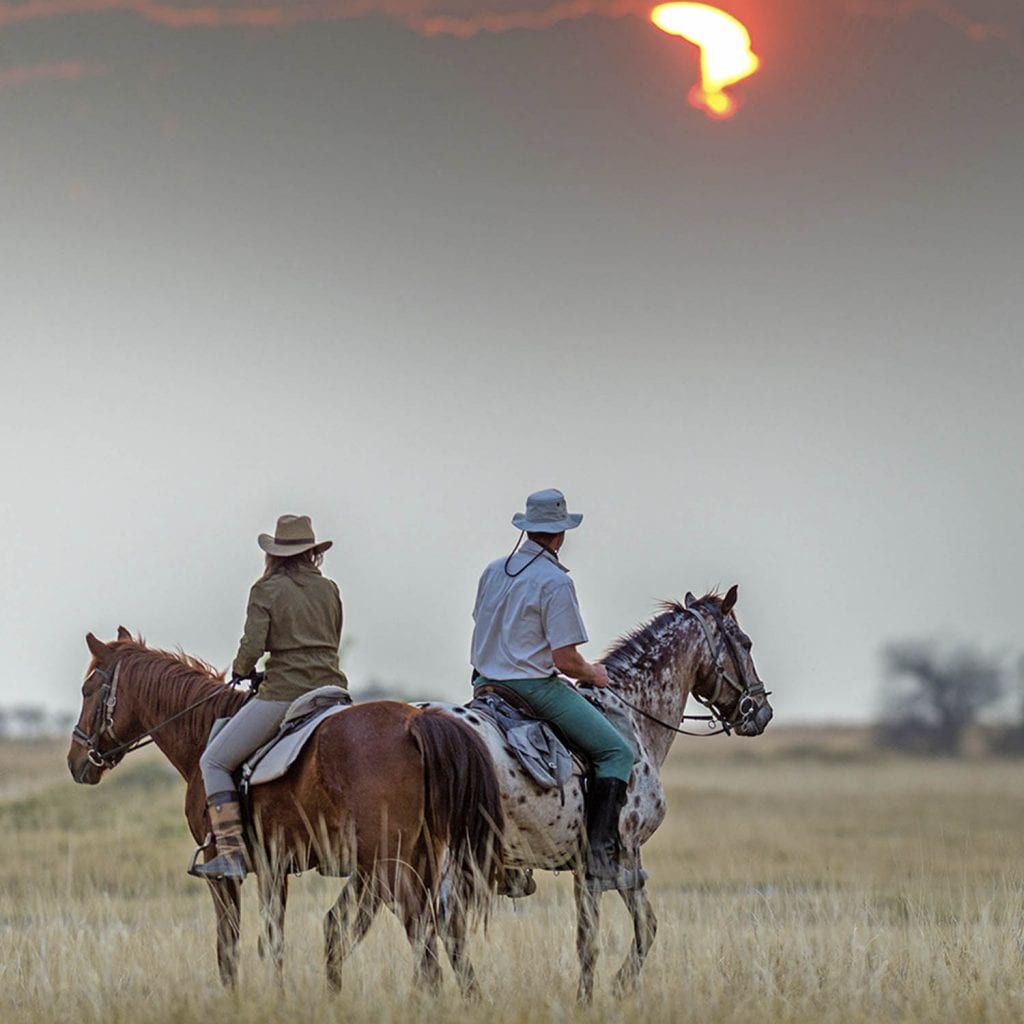 The best Horseback safari tours in the world

The best horseback riding safaris in the world include wild animals, adventure, risk and culture. Serengeti, The Mara, The Kilimanjaro, Botswana among them. In this note you will know everything you need before choosing the best horseback safari. 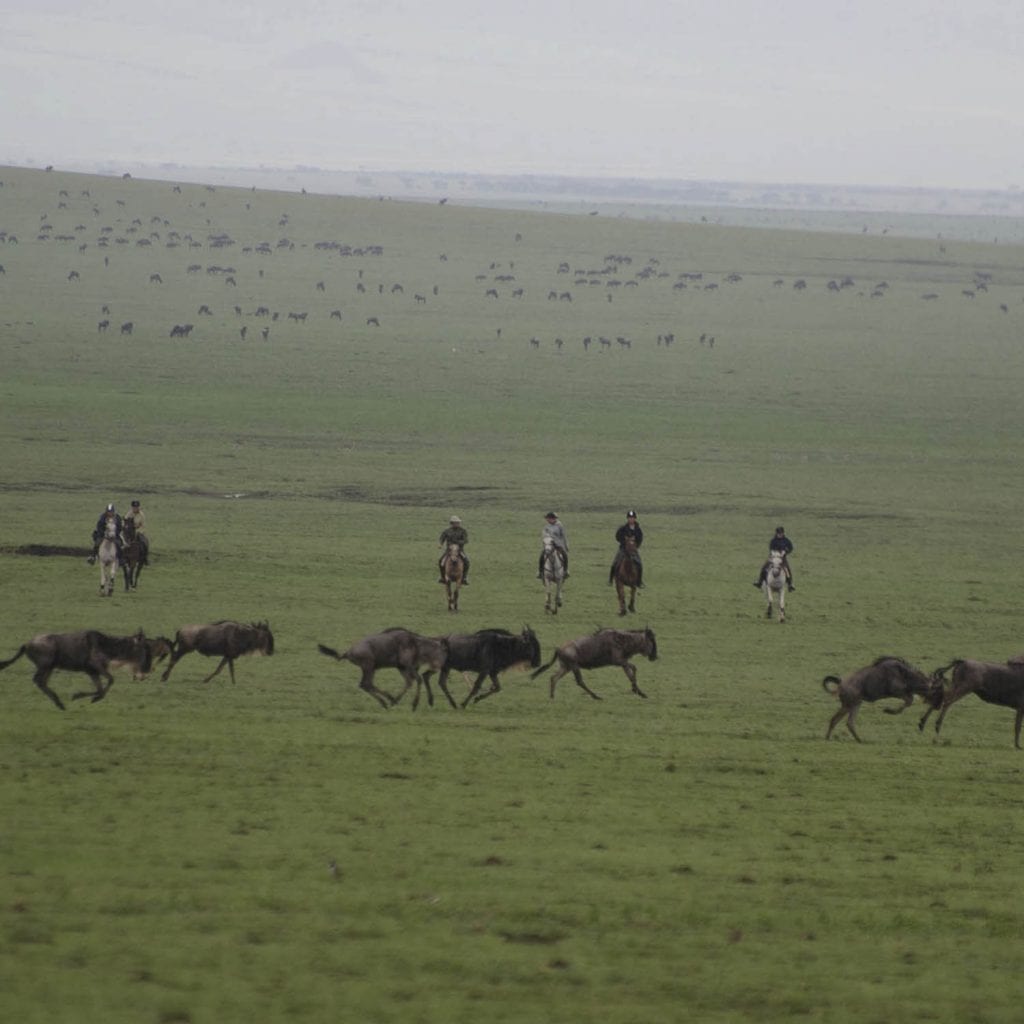 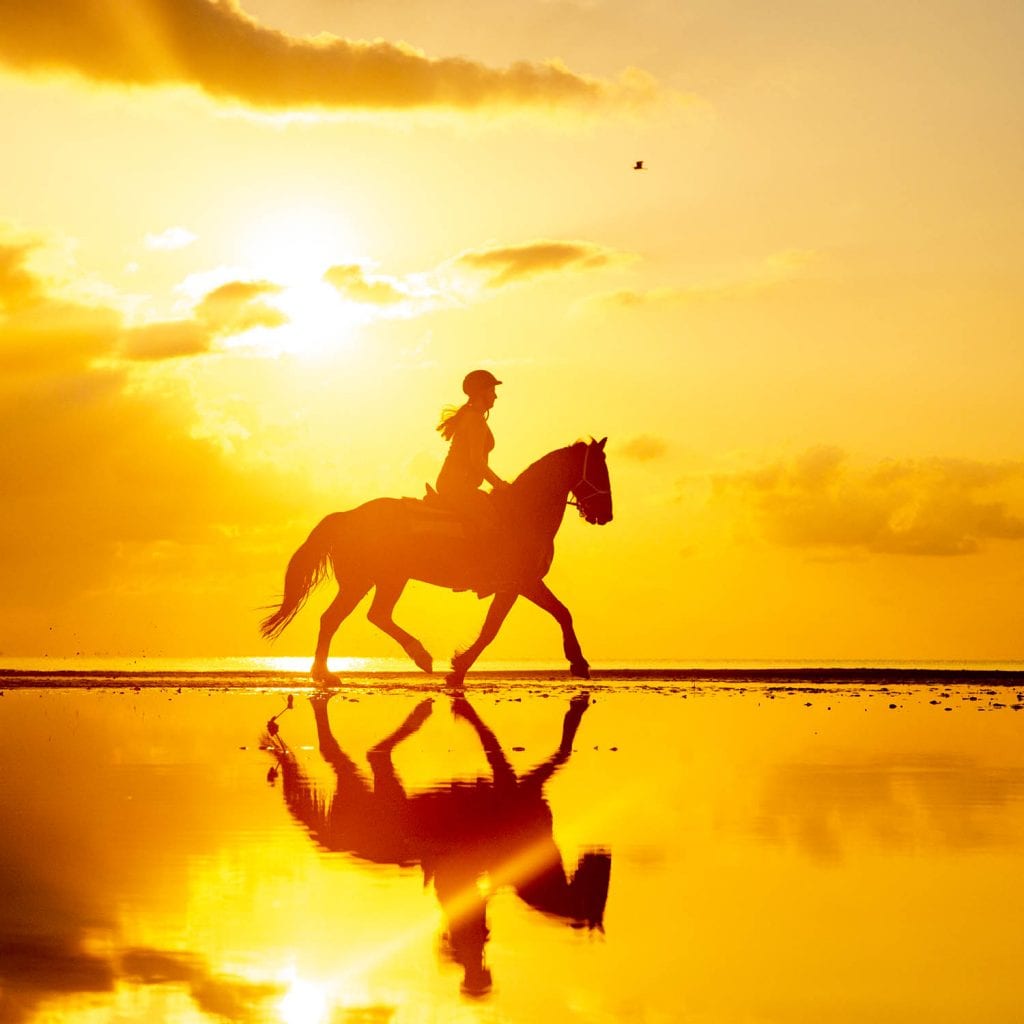 Everything you need to know before a horseback riding holiday in Mozambique, the famous coast known as the pearl of the Indian Ocean. In this note you will find the best tips to plan a dreamed horseback vacation in Mozambique.